In the East Bay, Alameda County’s median value was $29,000, a 29.0 percent decline from February 2008. The Contra Costa County median home sale value in January 2009 was $216,500, a 51.9 percent decline from February 2008 – due in part to foreclosure-related sales. In February, Contra Costa County continued to post the highest sales volume and the steepest annual decline in median sale prices throughout the Bay Area. 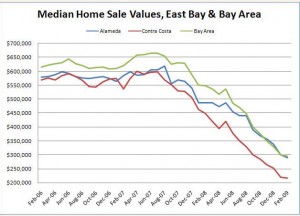 Oaklands Zip 94608 one of the hottest

Some ZIPs drawing more bidding wars Carolyn Said, Chronicle Staff Writer Saturday, October 24, 2009 The Bay Area locales where homes sell the most above asking price tend to be relatively affordable, according to a report from ZipRealty released Friday. That underscores the sway that investors and first-time home buyers hold in today’s real estate market, where bargain homes bring [...] 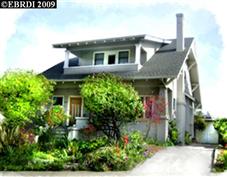 Matt Woolsey at Forbes loves to compile, collect, and claim.  Last week it was foreclosures, this week he has picked the 10 most luxurious, top-selling real estate markets in America.  #6 on the list?  Our own Rockridge, with a median price of $1.09mil and an average of 67 days on the market. So I guess I would be prudent to point out a [...] 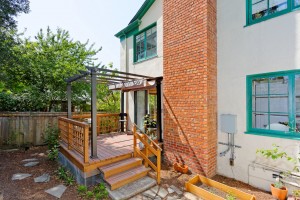 Hey guys!  We just listed this Sa-weet condo in the Gourmet Ghetto – 1828 Delaware Unit 2.  We held it open on Thursday and the feedback was great! Located in a quaint, 4-unit building this condo boasts privacy, community, creativity, and convenience. What is so special about this great condo is the yard…the PRIVATE yard.  Yes!  Deck, garden, roses, [...] 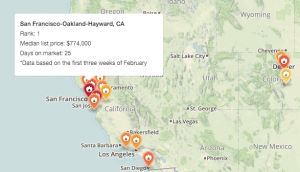 East Bay Living just got better!!  According to Realtor.com California is home to 12 of the 20 hottest real estate markets across the nation, 8 of which are in the top 10.  This is huge! The report also shows that sellers who are looking to move up should not wait. “As for sellers, while it might seem that they should [...]