The number of mortgage default notices filed against California homeowners fell last quarter compared with the prior three-month period, the result of lenders’ evolving foreclosure policies, an uncertain legislative environment and an uptick in the number of mortgages being renegotiated, a real estate information service reported.

“It may well be that lenders have intentionally slowed down the pace of formal foreclosure proceedings. If so, it’s not out of the goodness of their hearts. It’s because they’ve concluded that flooding the market with cheap foreclosures in this economic environment may not be in their best financial interest. Trying to keep motivated, employed homeowners in their homes might be the most cost-efficient way to stem losses,” said John Walsh, DataQuick president.

A year ago the percentage of foreclosures that had not yet re-sold was about twice as great, while the number of unsold foreclosures from the 18-month period ending in July 2008 was about 50 percent higher than it is now. 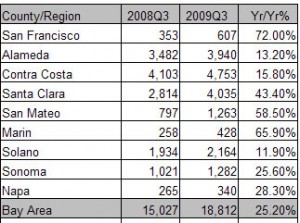 Berkeley, Calif., known sometimes as a hippie haven, is becoming a hotbed for home sales. Prices in the Bay Area suburb are up 9% this year, with homes selling for a median price of $790,986. Properties are sitting on the market for 73 days on average, the lowest of any area with positive price trends within the confines of the [...]

Effective today banks in California cannot foreclose a mortgage without either renegotiating the loan or giving the homeowner three months notice.  This is a good thing because it will encourage lenders to either cut rates or rewrite loans to affordable levels, which may allow many Californian’s to keep their homes.  Lenders will have to demonstrate that they have tried to [...]

Well, Berkeley is pulling it off once again.  While the rest of the nation continues to see prices decline, and see houses not sell, our little mecca is holding its own. This article, posted today in the Daily Californian, explains this further.  Several of my colleagues are quoted- kuddos to them for their part in this article.  Daily Californian By Melody [...]