Today I checked out Cafe M near Fourth Street in Berkeley.  I’ve been here a couple of times in the past and have generally enjoyed their food. It isn’t often that you can find outdoor seating at a Berkeley cafe but Cafe M has plenty, perfect for people watching.  The indoor seating is spacious and comfortable and the staff is [...]
Jan
29 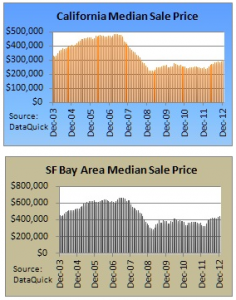 Posted In: Court and Auctions, First Time Home Buyers, For Buyers, For Sellers, Foreclosures & Short Sales, General Real Estate News, Local Market Statistics, Mortgage & Finance
Interesting article from www.foreclosuretruth.com http://www.foreclosuretruth.com/blog/sean/california-forecast-for-2013-more-of-the-same-save-the-black-swan/#comments I actually agree with most of this article, with my key thoughts being: In our neck of the woods trustee sale investors (think large suitcases full of cash on the courthouse steps) are seeing more competition but still finding amazing deals.  Most are not banking on large ROI’s anymore, just looking to make a few [...]
Jan
10

Posted In: For Sellers, General Real Estate News, Mortgage & Finance
Hear ye hear ye! The Federal Mortgage Forgiveness Debt Act Extended Through 2013! The Mortgage Forgiveness Debt Relief Act of 2007 that was set to expire on December 31, 2012, was extended through January 1, 2014. What that means is that mortgage debt that is forgiven as part of a debt restructuring agreement will not be treated as income for [...]